Get to know L0U13, one of the major characters in New Tales from the Borderlands.

After making absolutely sure that our names weren't on any active hitlists or bounty boards, we cautiously approached L0U13 on the streets of Meridian City and asked the assassination bot some burning questions we had.

Check out the Character Style Guide for L0U13 below! 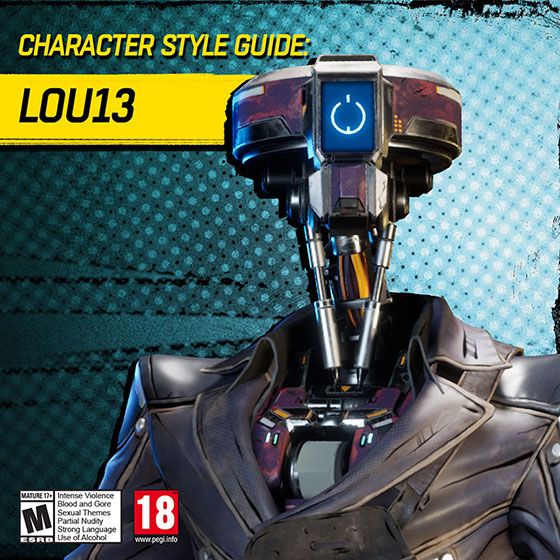 Q: You're an assassination bot; what or who brings you to Promethea?

L0U13: A transport ship brought me to Promethea. What a strange, seemingly irrelevant question.

Q: What is your relationship with Octavio?

L0U13: The first time I met Octavio, he suggested I was not a "people person" due to my penchant for giving blunt observation. Oh, and also assassinating people. Octavio offered to improve my social deficiency by extending his friendship, which is apparently an interpersonal relationship in which one person does not assassinate the other. In exchange for my protection, Octavio seeks to prove himself with his social skills. As far as I can determine, we are still in the proving phase.

Q: What do you do when you're not working?

L0U13: I am either recharging my ion battery or developing new material for my stand-up routine. To get noticed, you need a "tight five." I have yet to know what that means.

Q: You're getting into comedy—what's your go-to joke?

Your mother. That is what we in "the biz" call a heckle. I do not actually know your mother or if she is in any way comedic. The ignorance is part of the joke.

Q: We're really excited to jump into a new adventure! What's your biggest tip for surviving on Promethea?

L0U13: Do not allow bullets in or around your head. Organic brains do not function well when pierced by projectiles.