Re-Revenge of the Cartels Community Challenge!

Never one to learn from his previous mistakes, Maurice the Saurian has once again gotten himself into hot water with legitimate businessman Joey Ultraviolet. The exact nature of Maurice’s perceived transgression isn’t known, but suffice to say, the kingpin of the Eridium Cartel feels he’s been slighted in some way and must be seen to exact punishment. As such, Cartel Operatives will be scouring the galaxy in search of Maurice and, since you’re a known acquaintance of his, they won’t think twice before using you for target practice. 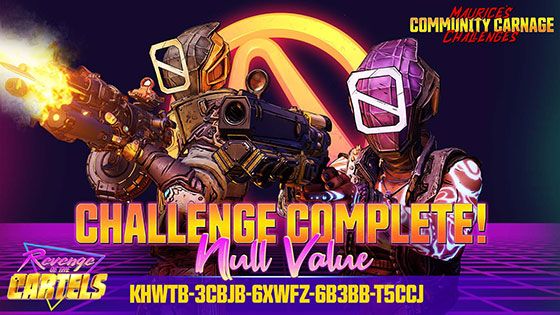 Now that Joey Ultraviolet has put a price on Maurice’s scaly hide, he’s unlikely to back down. Kill enough goons to make it clear that Maurice is a protected species, though, and perhaps he’ll reconsider. 15,000,000 Cartel corpses oughta be enough to send the message—and unlock the Null Value Vault Hunter head that’s perfect for cosplays of everyone’s favorite haiku-spouting assassin, Zer0. To participate, simply toggle on the Revenge of the Cartels seasonal event via the main menu to spawn Cartel enemies throughout the galaxy. Every Cartel member you kill will count towards the community total, and we’ll post occasional progress updates on the official Borderlands Twitter account.

The Cartel Operative enemies searching for Maurice are easy to spot because of their distinct neon glow. They frequently work alone, but don’t let that lull you into a false sense of security when you encounter one of them; killing a Cartel Operative triggers a dead-man’s switch prompting Cartel Thugs to warp in and look for revenge. If you want to take the fight to Joey Ultraviolet on his own turf—the luxurious Villa Ultraviolet on idyllic Joey’s Planet—keep your eyes peeled for Cartel informants. They drop Hideout Coordinates that Maurice can use to open a portal directly to the villa once you collect enough of them.

When 15,000,000 Cartel enemies have fallen, we’ll update this article with a SHiFT code that will grant the new Null Value Vault Hunter Head reward that can be equipped by all characters. You can redeem the revealed SHiFT code here on Borderlands.com, on the Gearbox SHiFT site, or via the in-game Social menu in Borderlands 3. Borderlands 3 and SHiFT account required to redeem. Each code may be redeemed once (1) per SHiFT account.