Starting April 23, battle your way through 10 increasingly challenging Mayhem levels to get your hands on some of the most powerful Legendary loot in Borderlands 3.

Mayhem Mode unlocks when you finish the main Borderlands 3 story and gives you the option to crank up the game's difficulty, thereby increasing the experience points that you get for killing enemies and the quality of the loot that they drop. With Borderlands 3's April 23 "Mayhem 2.0" update, Mayhem Mode will benefit from a number of improvements designed to offer a more varied, lasting, and rewarding challenge.

For starters, you'll no longer need to visit the pedestal on Sanctuary III to activate Mayhem Mode or adjust your Mayhem level; the option will be accessible via a new tab on your ECHO Device menu so that you can access it at any time. Note that in multiplayer games the Mayhem level will be determined by the host, and when you matchmake for multiplayer, you'll automatically be matched with players who are at a similar Mayhem level as you whenever possible. 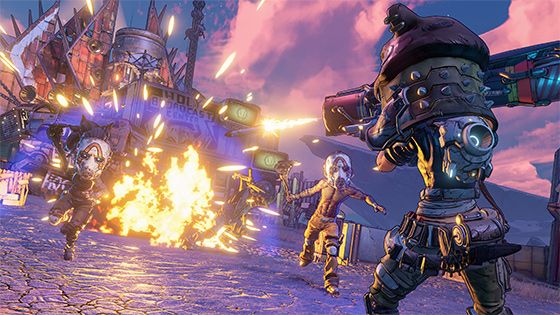 There will be more than 25 all-new modifiers that can be applied to your game, each rated as Easy, Medium, Hard, or Very Hard. Easy modifiers are largely helpful, and include things like Big Kick Energy, which actually increases your weapons' damage but also increases their recoil and spread. There’s also Galaxy Brain, which dramatically increases the size of enemies' heads so that crit shots are easier to land.

Venture into Medium modifier territory and beyond, though, and things start to get more challenging. For example, the Medium modifier Floor is Lava "encourages" you to keep moving at all times by forming a pool of damage-dealing lava beneath your feet when you stand still, and the Hard modifier Drone Ranger spawns Healing Drones to accompany and assist enemies. We'll let you discover the rest of the modifiers—including all of the Very Hard ones—for yourselves.

Modifiers are selected at random, but the number of modifiers and difficulty ratings of those modifiers are always the same for each Mayhem level, as shown in the table below.

The quality of the weapons dropped by enemies will improve as you work your way up through the Mayhem levels. For example, a Cutsman submachine gun that drops in Mayhem level 2 will be more powerful than one that drops in Mayhem level 1. Given that enemies' health, shield, and armor stats increase with each Mayhem level, the damage boost that you get from weapons in one Mayhem level will help you to prepare for the next. There are also eight new Legendary weapons that you can get from certain bosses only when playing at Mayhem level 6 or higher. The Sand Hawk, for example, is a Legendary automatic sniper rifle that fires a line of nine bullets that move to mimic the way that a hawk flaps its wings.

Put your Vault Hunter build and combat skills to the ultimate test by climbing up the Mayhem Mode ladder and trying to survive the madness of Mayhem level 10. As always, we're eagerly awaiting your feedback, so share your thoughts on Mayhem Mode with us anytime!