Today we'll release an update to Borderlands 3 by or before 3:00 PM PDT that fixes a number of reported concerns. In addition, we'd like to outline our goals for patches and hotfixes in the coming weeks. But first, this week's patch notes and hotfixes: 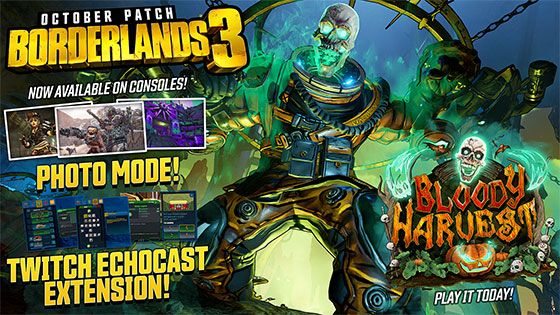 As stated in last week's stream, this week's changes focus less on weapons and more on fixes across the game. We are gathering data, reading feedback, and working toward improving all aspects of the game. Please keep submitting bug reports to support.2k.com!

Those are a lot of notes to take in, and we're still hard at work addressing reported issues in Borderlands 3. But given that we're just about a month out from Borderlands 3's launch, we'd like to take this opportunity to outline our plans for future updates, including some of the community's most frequently requested changes. There can always be unforeseen challenges when working on patches and hotfixes, so we'll keep you posted on more concrete release timings as these updates continue to progress. Here's a look at some of the things we're working to implement in future patches.

Game performance and stability continue to be our top priorities. The first fruits of that labor will be released in our upcoming November patch, with various improvements game-wide. We've also been hard at work improving the game's stability and more improvements in this regard are expected to be included in the November patch. Performance and stability will continue to be an ongoing effort with more fixes rolled out with each upcoming patch.

Expanding the bank has been the most consistently requested feature by the community. We've heard you loud and clear and the groundwork for expanding the bank has already started. The first of several planned expansions will coincide with the release of Takedown at Maliwan's Blacksite. Expect a significant bank expansion that will more than double the existing space. Additional expansions to the bank will continue to be rolled out over future releases.

Several of you have stated a desire to find gear more easily in the game. To do that we are updating the loot pools (the data that determines what in-game items drop) to ensure that more specific gear drops from bosses. That means you'll be able to go to a specific boss to get the specific gear you're looking for. We're working out which bosses get which gear right now and expect this to be ready as part of the November patch as well.

In the late stages of the game when Mayhem Mode is active, we've found that player companions (Moze's Iron Bear, FL4K's pets, and Zane's Digi-Clone/SNTL) are reportedly not performing as well as we had expected. To address this, we're looking at how to adjust damage according to the relevant skills and gear. The goal here is to make sure we have as many viable character builds as possible.

Mayhem Mode has been a fantastic addition to the Borderlands world. After receiving some great community feedback, we've been hard at work on a significant revamp that will introduce a host of improvements over several upcoming updates.

The first update will be released as part of the Takedown at Maliwan's Blacksite and includes the first new Mayhem Mode level, Mayhem 4. Expect a significant challenge when it debuts, with tougher enemies that reward players with highly synergized character builds. A new batch of Legendary gear will also only drop while in Mayhem 4 to reward those players who are truly up for the challenge.

Longer term we have plans to overhaul Mayhem Mode with more UI support, new Mayhem Modifiers that change gameplay more dramatically, Mayhem playlists, new rewards, and additional levels of Mayhem to work through. We're excited about Mayhem 2.0 and we'll talk more about it when we get a little closer to its release.

Marcus heard the outcry for more vending machines, so we're airdropping in some more across multiple maps. Expect new ammo and health vending machines outside of a few boss arenas and a few in some of the bigger environments. Below are the locations where the new vending machines will be appearing:

We're currently investigating the best way to approach letting players skip cutscenes. This is much easier said than done. Under the hood, the game may activate critical events based on cinematics. In order to make sure mission progression isn't negatively impacted, we need to inspect each cinematic and make sure those events still work correctly. We have a few ideas on how to tackle this problem and expect to have a solution soon.

Need an easier way to test your gear? We're going to add a target dummy to the shooting range on Sanctuary III! We feel this is the best location since your bank is also on the ship. This way you can manage and test your builds on Sanctuary III without having to travel anywhere else. You can expect to see this sometime in December.

The list above is only a high-level look at what some of our teams are working on. Stay tuned as we continue to add more information and additions to this list. We here at Gearbox are excited about where Borderlands 3 is heading, and we look forward to showing you all the content that's still to come!