Tune In to The Borderlands Show and Twitch Rivals

UPDATE: Due to scheduling conflicts, The Borderlands Show Episode 1 has moved to Friday, September 20, but the Twitch Rivals event is still happening this Wednesday, September 18! Full details and updated times are below.

Borderlands 3 is finally out in the wild, and we hope you've enjoyed your first weekend of mayhem-fueled adventure. But even as you're playing through the story campaign and leveling up your Vault Hunter, it never hurts to plan ahead. If you're looking forward to everything Borderlands 3 has in store, you'll want to tune in for some major events this week. On Wednesday, September 18 you can witness fierce co-opetition in our first-ever Borderlands 3 Twitch Rivals event. Then tune in for the debut episode of The Borderlands Show, hosted by Kinda Funny's Greg Miller and Fran Mirabella, which drops this Friday, September 20. At 11:00 AM PDT on Wednesday, September 18 (localized times listed below), we'll be kicking off our Twitch Rivals tournament stream on the official Borderlands Twitch channel, featuring teams of your favorite streamers battling for Proving Grounds glory. Four teams of four—all comprising one of each Vault Hunter—will compete to see who can make it through multiple difficulties of the Proving Grounds challenge maps the fastest, with $50,000 in total prize money up for grabs. Whichever team successfully beats this gauntlet first won't have long to celebrate, because members of the winning team will then have to duke it out in 1v1v1v1 duels to see who truly reigns supreme.

Twitch Rivals will also be a great showcase of the Borderlands 3 ECHOcast Extension on Twitch, which has already been a huge hit with streamers and their audiences since launch. The ECHOcast Extension lets viewers inspect the streamer's Vault Hunter, including their gear, skills, and Guardian Rank, and it's also a great way to amp up Borderlands 3's mayhem even further. Taking part in ECHOcast features like Badass Events can buff in-game enemies in real time, wreaking havoc on a team's plan of attack; you can read more about how it works here. We're excited to see how viewers like you take advantage of the ECHOcast Extension during the Twitch Rivals event to support their favorite streamers and their teams, or gleefully sabotage the current frontrunners to help even the odds. You won't want to miss this intense contest, which is sure to be packed with clutch saves, dramatic betrayals, and innovative Vault Hunter builds.

Later in the week, grab a seat and get comfy for The Borderlands Show. If you didn't catch the PAX West reveal of The Borderlands Show, this monthly web series is a chance to discuss all things Borderlands, get an early look at content coming to Borderlands 3, and hear from the developers themselves. Speaking of, The Borderland Show's first guest will be Paul Sage, Creative Director on Borderlands 3; make sure you read his launch day letter to the Borderlands community. If you have questions or comments for Greg, Fran, and Paul, you're encouraged to submit them via this form for a chance to be featured on the show. The first episode of The Borderlands Show will be broadcast on the official Borderlands Twitch channel starting September 20 at 10:00 AM PDT; see the list below for localized times. 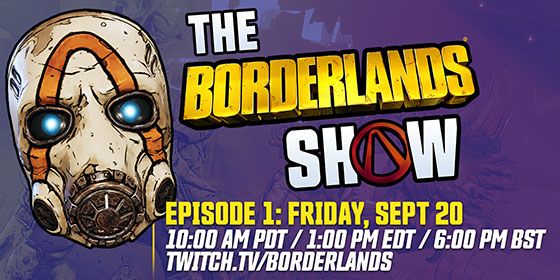 Tune in to this first episode for some spoiler-free discussions of Borderlands 3's launch, teases of our plans for the TwitchCon event happening later this month, and a preview of the upcoming Bloody Harvest event. Bloody Harvest is the first in a line of free content updates for Borderlands 3 over the coming months, and in keeping with the Halloween season, it'll chill you to the bone with a spooky new setting, eerie enemies, and the promise of hair-raising rewards should you survive.

We hope you enjoy our Twitch Rivals event and the debut of The Borderlands Show; stay tuned for even more entertainment to come!